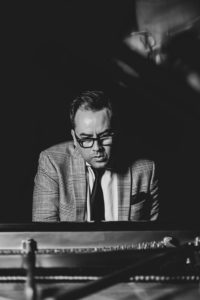 Alex Navarro is a Houston of native. He currently serves as president of the American Federation of Musicians, Houston, Local 65-699, pianist for the Houston Ballet Academy and remains highly in demand as a freelance musician. Alex’s career began in Los Angeles in where he was widely known as music director for Engelbert Humperdinck. Other notable recording and performance credits include artists Queen Latifah, Carly Simon, Rod Stewart, Art Garfunkel, Natasha Bedingfield, Rita Wilson, Doc Powell, Taylor Dayne, the Prague Philharmonic, the BBC Radio Orchestra, the Newark Symphony and the Omaha Symphony. Alex has also worked alongside producers Phil Ramone, Clive Davis, Richard Perry and Phil Galdston. Broadway credits include keyboardist for Waitress and the national tour of 42nd Street. Additionally, Navarro conducted the regional production of Grease for The Engeman Theater, as well as Spring Awakening and Seussical, The Musical for Theatre Under The Stars. Alex’s playing and arrangements can be heard on two Grammy-nominated albums, as well as two RIAA-certified gold records. He has appeared on The Today Show, The Tonight Show, The Late, Late Show, Regis and Kelly, The Ellen Show, The American Music Awards, The Martha Stewart Show and A&E Private Sessions. Navarro holds a Bachelor’s degree in Music from The University of North Texas and a Master’s in Music from New York University.

3/6/2021 Alex Navarro was top notch! So kind, easy to work with and they sounded amazing! Thank you guys for the perfect suggetion! As always Sam was easy to plan with and helped make the night run smooth by doing a walk through with the client! I appreciate the teamwork! -Rebecca