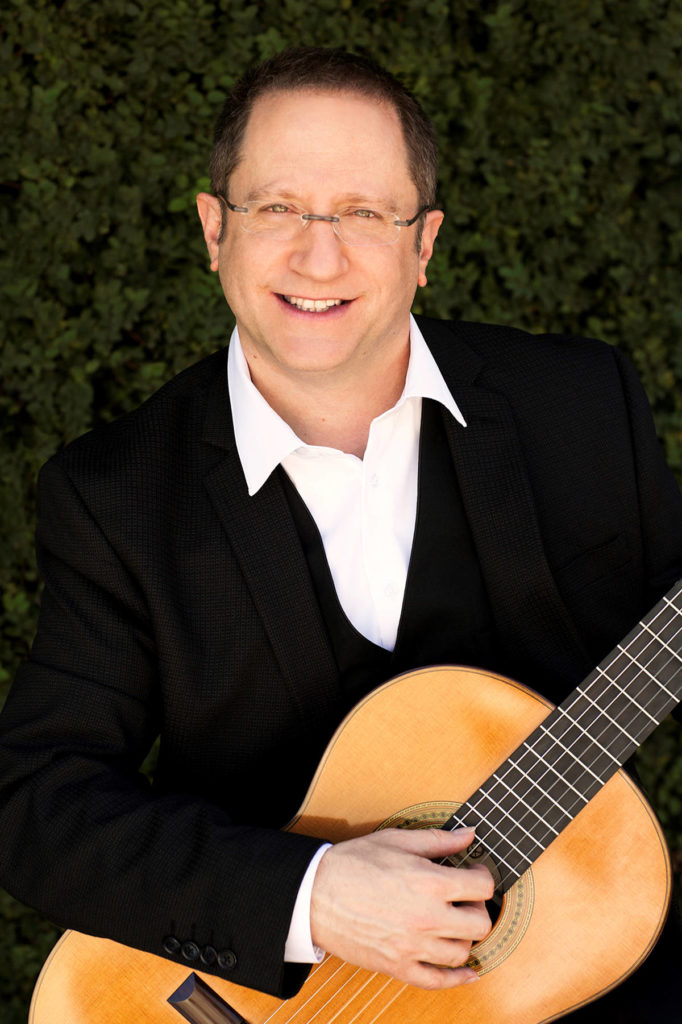 Marc Garvin is a guitar soloist, chamber music performer, public speaker and well-known instructor. He’s performed regularly with Houston’s classical music triad: the Symphony, Grand Opera, and Ballet. He’s accompanied Italian soprano Cecilia Bartoli, New Zealand’s Hayley Westenra, and legendary Italian tenor Luciano Pavarotti. In the summer of 2018, he performed in Spain as part of ChamberArt Madrid. The Houston Ballet tapped him as solo guitarist for its American premier of Christopher Bruce’s Ghost Dances. Whether performing with the Pittsburgh Symphony Chamber Music Ensemble, at the Kennedy Center in Washington, D.C., or as a recitalist through the Texas Commission on the Arts, his enthusiasm and musicality has charmed audiences throughout the United States and Canada. Calling Houston home, Marc made the airwaves vibrate on Houston Public Radio (KUHF-88.7 FM), where he co-hosted Pulling Strings – a weekly show for music lovers with an ear for instruments that are picked, plucked, and strummed. Marc Garvin’s recent appearances include a Latino/Sephardic concert called “Latin Groove, Jewish Roots” and “The Final Fantasy” concert at Rice University with well-known conductor, Arnie Roth. In addition, he was recently selected by The DaCamera Society to speak and interview Pepe Romero of the Romero Quartet. In the summer of 2015, Mr. Garvin worked on a project along with Rice University composer, Richard Lavenda on a score for 2 guitars to be performed in the fall of 2015 in a special Latin music concert. In addition, Marc teaches each summer at the Bellaire Summer Guitar Conservatory. This program is for underserved student guitarists throughout the Houston area. Other Public performances include several appearances with Kevin Riehle’s, “Cantare Houston. Additional performances include The Houston Grand Opera’s Premier of “Pieces of 9/11: Memories from Houston”. This seven-part song cycle written by Jake Heggie (Dead Man Walking, Three Decembers, Moby Dick) and librettist Gene Scheer (Three Decembers, Moby Dick) fused stories from those who were affected by, or responded to, the tragic events of Sept. 11, 2001. Other recent performances include, Mario Castelnuovo-Tedesco’s “Romancero Gitano” with The University of Houston’s chamber choir and The Rob Seible singers. He has also performed with The Piping Rock Singers directed by Dr. Isabelle Ganz, and has given solo and duo recitals at the Classical Minds Guitar Festival as part of the Texas Music Festival at the University of Houston. In addition, Marc was a featured soloist with the Houston Symphony in July of 2010 for the “Final Fantasy” concert. In December of 2009, Marc played 3 sold out performances with the Houston Chamber Choir at the prestigious Chapel of the Villa de Matel. In the autumn of 2009, Marc Garvin performed in several locations throughout the Houston area with Israeli vocalist, Etty Ben-Zaken featuring Eitan Steinberg’s arrangements of Sephardic music. Also in the autumn of 2009, Mr. Garvin performed as a soloist at the Byzantine Fresco chapel, sponsored by the DaCamera Society. As a graduate with a degree in music from Carnegie-Mellon University, Marc Garvin has placed a high emphasis on music education. He currently teaches a full schedule of students at his private studio and St. Francis Episcopal Day School. In addition, he teaches 2 performing ensembles at Houston’s High School for Performing and Visual Arts. He joined the faculty of Lone Star college in January of 2019. As a college professor, Mr. Garvin has been on the faculties of Carnegie-Mellon University, Houston Baptist University, Lamar University, Houston Community College and San Jacinto Jr. College. He has also worked as an artist on the roster of Young Audiences of America, and was an active teaching artist for the Texas Institute for Arts in Education. Many of his students have been accepted to prestigious music schools including The New England Conservatory of Music, The University of Southern California’s Thornton School of Music, The Butler School of Music at The University of Texas, The University of Miami’s Frost School of Music and The Beinen School of Music at Northwestern University. For more information on Marc Garvin, go to www.marcgarvin.com Not sure if this is the right band for you? With just a few pieces of information, we will send you a free, curated list of entertainment options for your event.