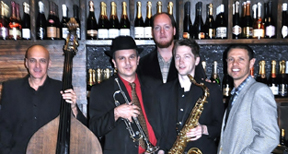 Ken Easton is a trumpeter/pianist/composer/educator with has roots in the Houston music community. Arriving in Houston in 1995 to obtain a Master’s in music performance from Rice U, he started Moment’s Notice Jazz shortly thereafter. “The original concept was to model Art Blakey’s Jazz ” Easton says, “but the group has expanded into much more than just a traditional jazz group”. And tradition is the key word because the group’s expanded repertoire has made this band one of the most versatile, swinging, exciting groups on the scene today. “Our core group is always going to be rooted in the rich, wonderful acoustic jazz tradition, however through technology and an expanded repertoire (including originals) we are able to round out our sets with more modern “Brecker Brothers” style playing which we love as well.” Indeed, armed with effects and sound equipment, this group can change venues as the drop of a hat hence the name “Moment’s Notice”. Easton has performed as a trumpet soloist with many notable local groups including, Eclipse, Richard Brown’s Big Band, Ronnie Renfrow’s Big Band, Houston Grand Opera and is currently a member of Grammy-nominated Aviso (Houston’s Latin powerhouse group). On the national he has performed with the likes of notables such as Cuba Gooding, Archie Bell, Mulgrew Miller, Chris Vadala and a host of others including finishing coast to coast tours with the Army Jazz Guardians and a world tour on Regency . Easton offers the group in various configurations, and while he prefers to work with his quintet, he also can expand the group all the way up to band, or play solo/duo with tracks. You can count on Moment’s Notice to deliver a great performance/show every time!